HKU graduation project / Binnenhof, The Hague / 2020
Climate change. The assignment of my generation, our chance to become part of history? With this project I react to the empty radicalism of the climate movement and romanticize about climate change as a greater goal. Through speculative architecture I research and imagine a vision of the future, an utopia. With my design of a new parliament building I visualize a totalitarian government and a society capable of successfully achieving our climate goals. Due to the COVID-19 disease the debate about targeted government action has become all the more relevant, what at first seemed highly unlikely could soon be possible.
CONTEXT
The assignment of my generation: Reduce global emissions down to zero in the next 30 years to stabilize global temperatures at no more than 1.5°C above preindustrial levels to limit the destructive effects of the climate crisis and avoid reaching the point of no return.
The rejection of targeted government action has delayed, or even prevented, an adequate response to the global climate crisis. The only realistic path to the radical changes necessary to successfully achieve our climate goals would consist of a total mobilization aimed at rapidly cutting carbon dioxide emissions.
Then why are we not mobilizing? Our current environmental movement only embraces small-scale, decentralized, bottom-up solutions in contrast to the centralized, state-led and technocratic solutions that a rapid transition on this scale would require. To scale renewable energy, low-carbon infrastructure and low-carbon industry so that it might contribute to the fight on the climate crisis, requires top-down government interventions that are not in line with contemporary environmental thought or our western and democratic views.
PROJECT
The mobilization and rapid transition to a low-carbon society have reduced the global emissions down to zero and have saved the environment from further ecological degradation, and humanity from further suffering of climate hazards.
The political movement behind this mobilization has successfully established the totalitarian government necessary for realizing our climate ambitions without the needed political consensus or public opinion. This is unavoidable, a political movement that favors their ecological ideologies above everything else.
With the parliamentarian building of the Dutch government in The Haugue, The Binnenhof being the result of continuous architectural and programmatic transformation since the 13th century, its endless restoration and incremental changes reflecting the unwillingness of previous democratic governments to make significant changes.
One of the first things the new government did, was demolish and rebuild The Binnenhof to establish their right to rule, mark the beginning of a new era and manifest their ideologies in the physical realm of society. The New Binnenhof came into existence.
*shortlisted - ARTS THREAD Global Design Graduate Show, architecture, 2020
*exhibition - 'Van wie is de wereld?', Museum de Fundatie Zwolle, 2020

The New Binnenhof is a physical manifestation of the ideology of its users, extremely authoritarian and sustainable to its core.

The orientation of the building gives the New Binnenhof a prominent position in the city and makes maximum use of passive-solar energy possible.

The plenary hall organized in classroom typology facilitates the hierarchical decision-making of a total government and looks out over the enclosed forest.

Every political decision is made with a clear view of the nature within the building and no possibility to see the city or society outside of the building.

Movement through the building goes around and through the forest, also informal decision-making takes place in close contact with nature.

From outside the building is completely closed to manifest authority and emphasize hierarchy.

Recycling the old Binnenhof
To recycle and reuse the old Binnenhof in a sustainable material, rammed earth is chosen for construction. The clay bricks will be crushed to an aggregate and mixed with locally won sand and clay to be rammed into the final material. By using different aggregates based on size, differences in color can be achieved. 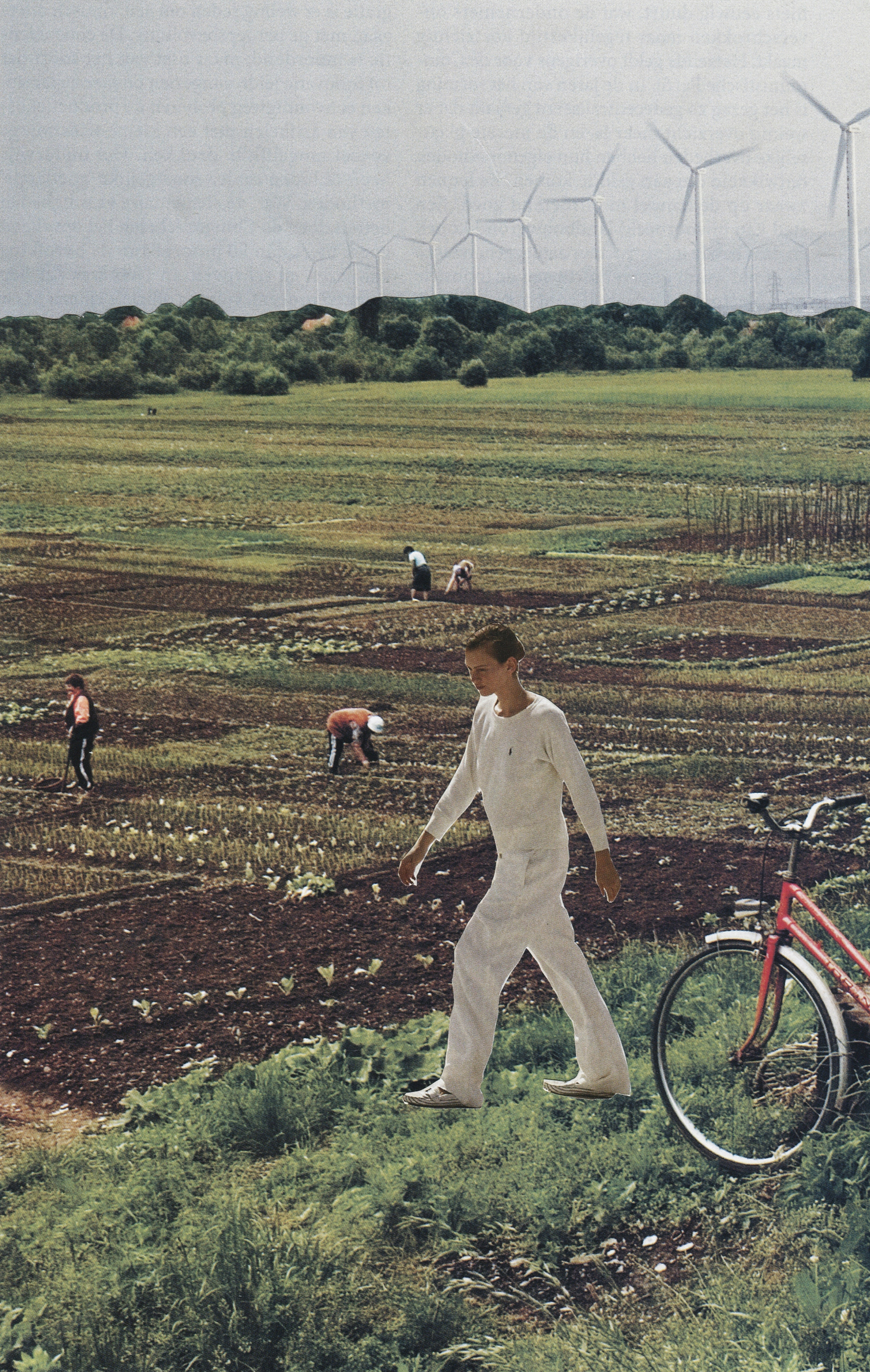 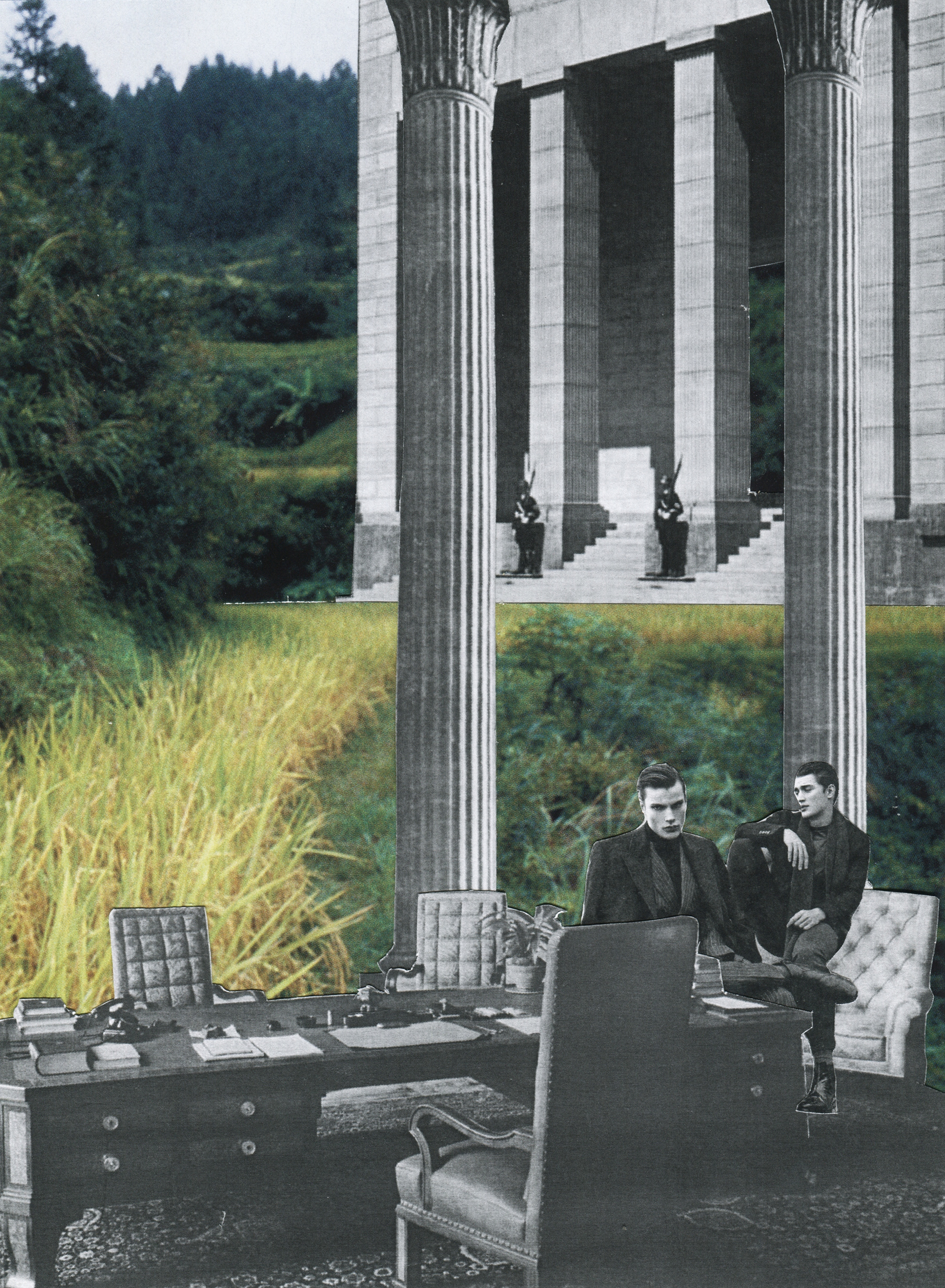 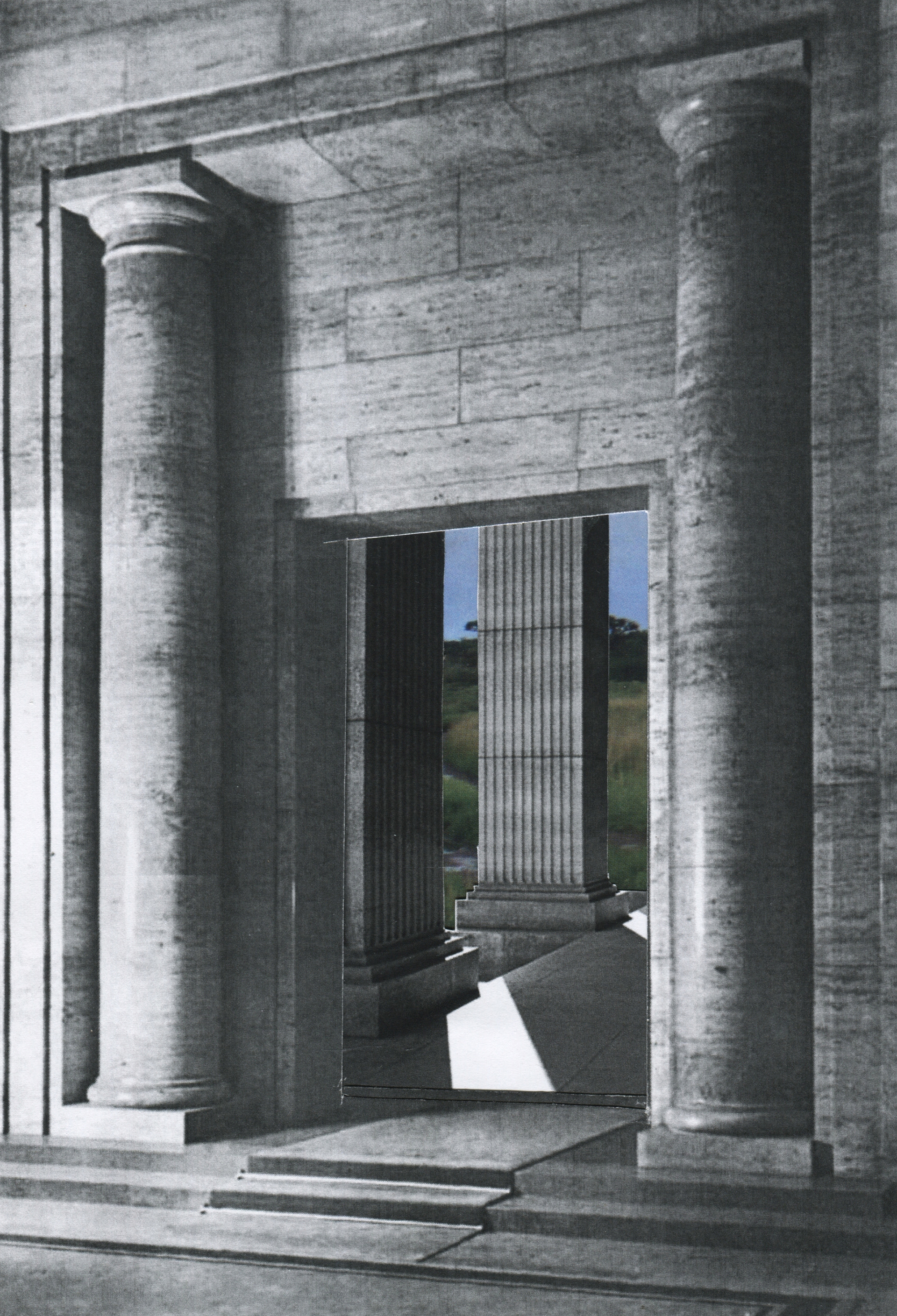 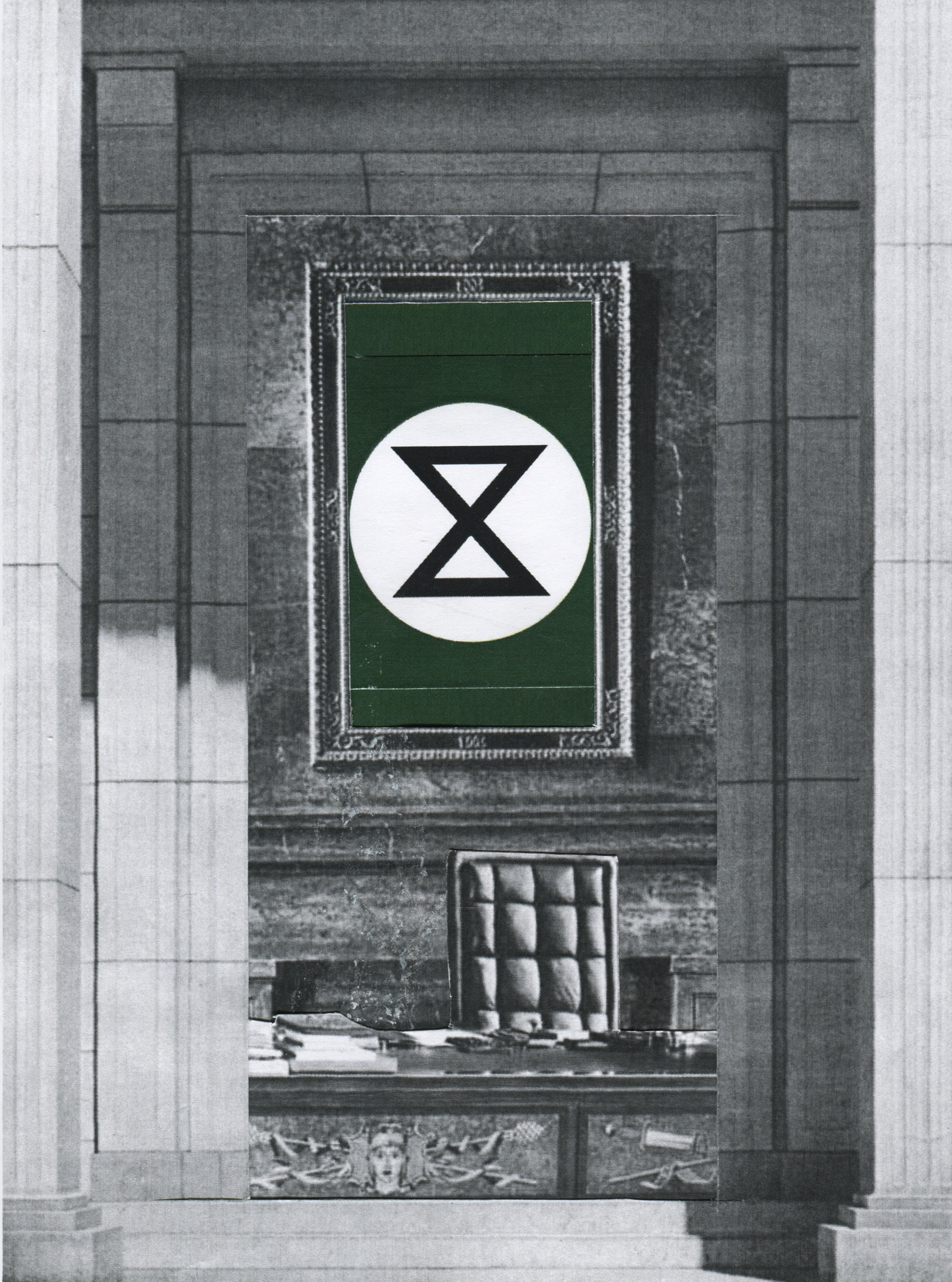 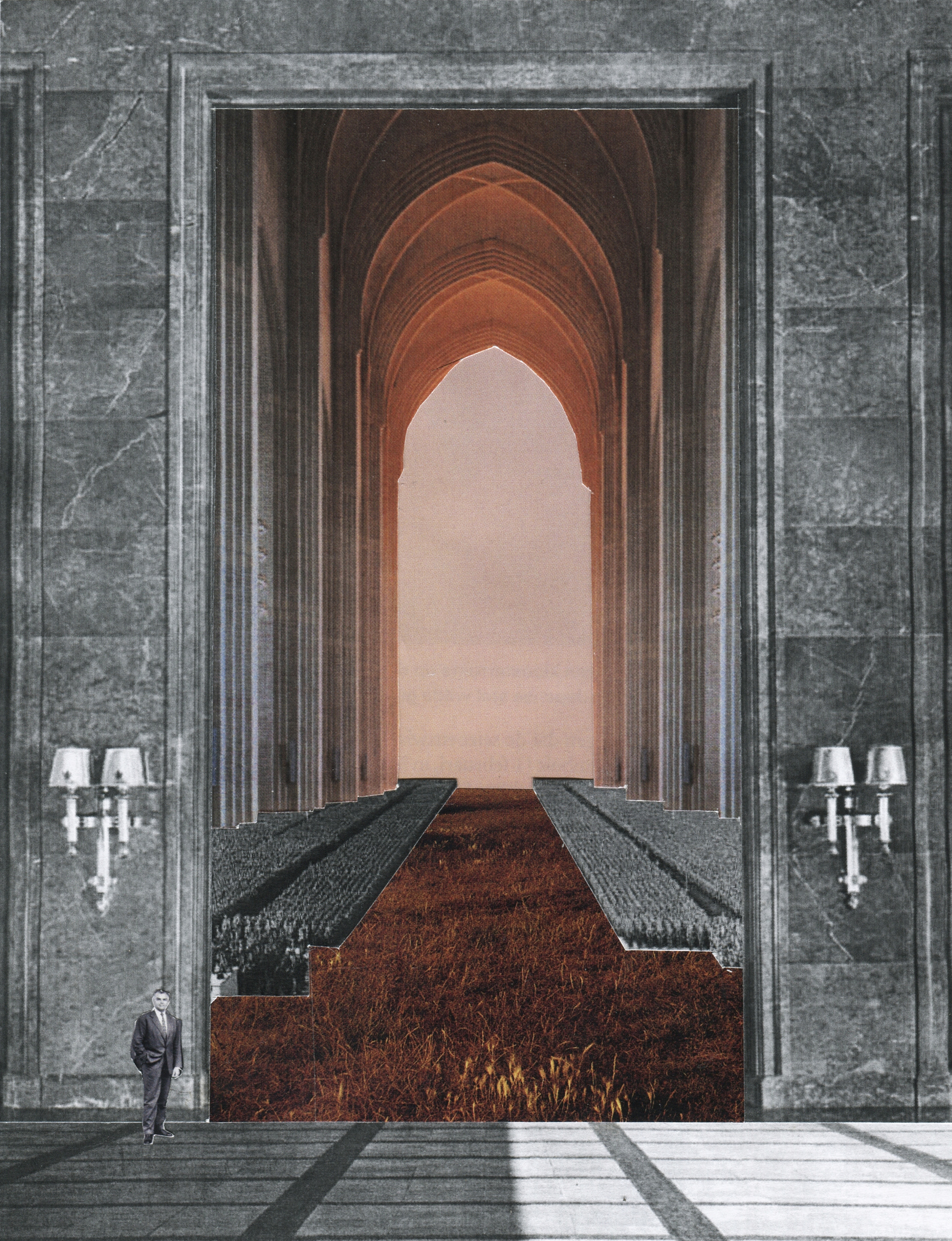